According to a lawsuit filed in 1993 in Milwaukee County Circuit Court, State of Wisconsin, it was alleged that various media across the country had reported that 47 year old attorney Catherine Doyle, the sister of then Wisconsin Attorney General James E. Doyle, had kicked a 7 year-old girl child in the face while the child was kneeling praying in front of an abortuary on May 15, 1993.  Some of the media purportedly broadcasting the story were Focus On The Family of Colorado, The American Family Association of Mississippi, and VCY America, Inc. of Wisconsin.
The court files have been sealed for some unknown reason, but apparently the original Complaint named VCY America, Inc., then apparently known as Wisconsin Voice of Christian Youth, and quite a few other entities and pastors, including the father of the little 7 year old girl that Doyle had allegedly kicked in the face, as defendants, with Catherine Doyle the named plaintiff.
Steve Magritz, who was subsequently victimized by numerous Public Officers in Wisconsin acting in Breach of their Fiduciary Duty as Trustees of the Public Trust by having his land stolen at gunpoint, his good reputation destroyed, and then imprisoned, was eventually wrongfully brought into that lawsuit in 1999.  In 1999, in the FOURTH Amended Complaint, Magritz was falsely accused of conspiring with VCY America, Inc., a Christian Broadcasting organization headquartered in Milwaukee, against Catherine Doyle.
But Magritz did not even know who Catherine Doyle was at the time of the alleged conspiracy against her.  Magritz had not heard the broadcasts on VCY, or any other media, that had allegedly stated Catherine Doyle had kicked a 7 year-old girl child in the face while kneeling praying on a sidewalk.  Magritz never stated to anyone that Catherine Doyle kicked the little girl in the face while the girl was kneeling praying on a sidewalk.  Magritz did not see Catherine Doyle kick the little 7 year old girl child in the face while she was kneeling praying on the sidewalk.  Magritz had not been at the abortuary where Catherine Doyle allegedly kicked the little 7 year old girl in the face.  In fact, Magritz has never been at any abortuary, nor has he ever met Catherine Doyle, nor does he even know what she looks like.  Magritz never spoke to anyone who had allegedly stated that Catherine Doyle kicked a 7 year-old girl child in the face while the child was kneeling on the sidewalk praying.  Magritz had no involvement whatsoever with Catherine Doyle or anything relating to Catherine Doyle.  All that Magritz can say for certain is that he was falsely and viciously attacked in the FOURTH Amended Complaint filed by attorney Catherine Doyle, a total stranger, and any attorney who falsely and viciously attacks a total stranger is more likely than not capable of virtually any crime against anyone regardless of age, sex, color, religion, nationality, belief, hair style, etc.
Thus it was a total shock to Magritz when he was subpoenaed in 1999 in the case against VCY America, Inc. et al.  Magritz contacted plaintiff's attorney Beth Kushner of the Von Briesen, Purtell & Roper law firm requesting a copy of the Fourth Amended Complaint in which Magritz was named as a conspirator.  Kushner refused to send Magritz a copy of the Complaint, stating in her letter that the Complaint was a matter of public record and Magritz could go get his own copy.  The stench and red flags went up.  So Magritz obtained his own copy, and was astounded to find that a complete stranger to him, a person he had never heard of, attorney Catherine Doyle, could have made such vicious, false accusations against him.  Obviously something else was going on here.

Shortly thereafter, Magritz was given a copy of an incendiary letter that Beth Kushner wrote to the judge about Magritz.  That was the last straw.

Who in their right mind is going to let these filthy, lying dog attorneys named Beth Kushner, Catherine Doyle, and "Bubba" James E. Doyle get away with making false, scandalous statements and accusations against a man's good character?

So, Magritz started his own investigation:

Magritz started his own investigation and found that the Von Briesen, Purtell & Roper law firm was connected at the hip, commercially speaking, to AG James E. Doyle's Wisconsin Department of Justice.  Further, attorney Beth Kushner was not running the "Catherine Doyle" lawsuit against VCY out of the regular Von Briesen, Purtell & Roper law offices.  And from the tenor of the FOURTH Amended Complaint it was apparent to Magritz that there was a "fishing expedition" being conducted by Attorney General James E. Doyle.  Magritz sent out his own "discovery" requests for admissions, and to his surprise the "Catherine Doyle" lawsuit was settled out of court within 2 weeks, and the case file at the courthouse was sealed.
The admissions that Magritz obtained, which included an admission that Attorney General James E. Doyle was using taxpayer funds for what ostensibly was his sister's private "civil" lawsuit, were substantiated by the documents mistakenly provided to Magritz by AAG Korte when Doyle and Korte tried to put Magritz away for life as "payback" for Magritz exposing "Dirty Jim".
It was obvious that attorney Catherine Doyle was not the mover and shaker behind "Catherine's" lawsuit, but actually her Big Brother, "Dirty Jim" Doyle, Wisconsin Attorney General, who was out to destroy VCY America, Inc. and was using taxpayer money to conduct a criminal investigation of VCY America, Inc. under the guise of his "little sister's" civil lawsuit.
Did they die in vain? 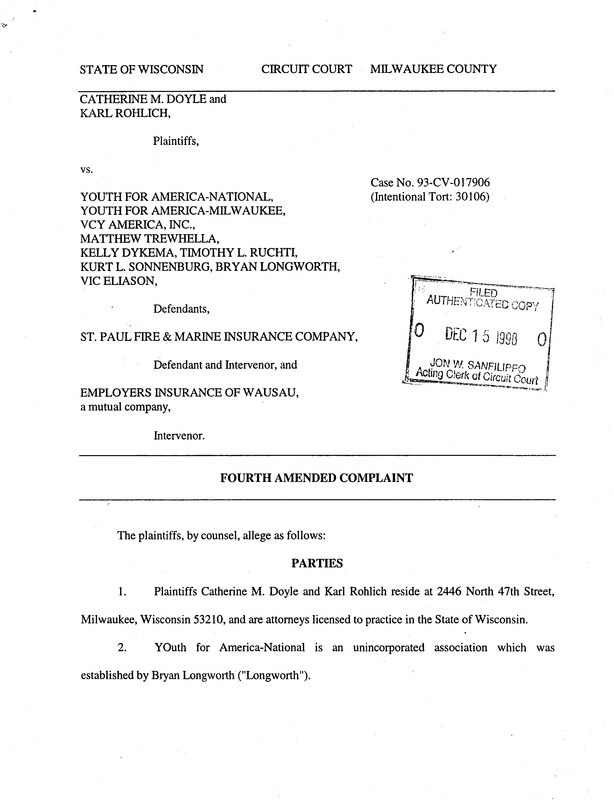 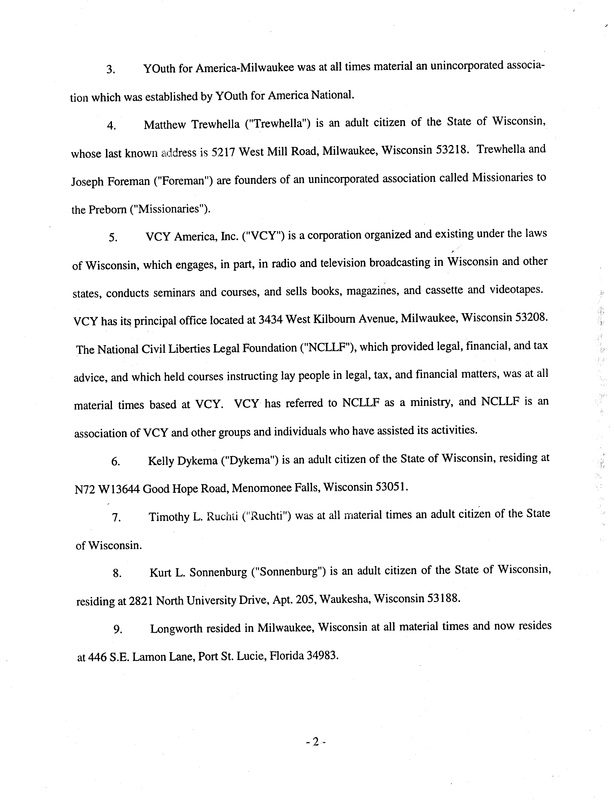 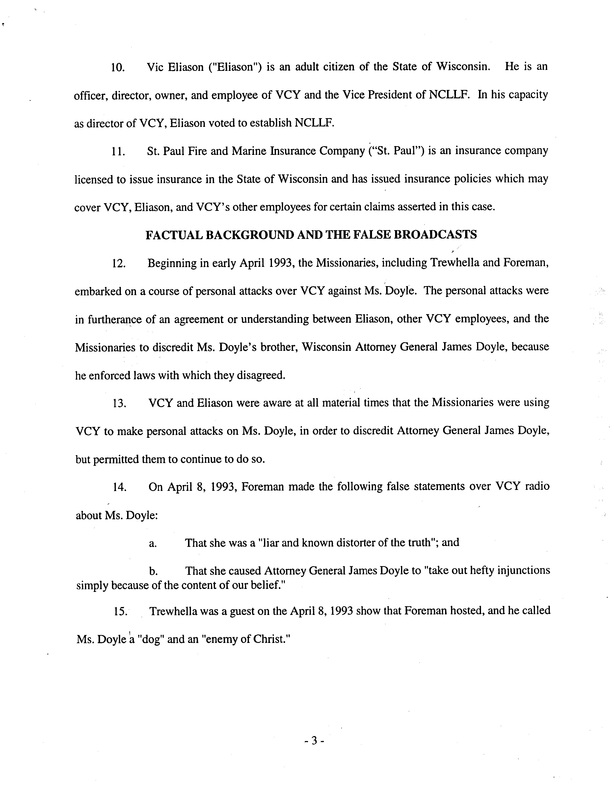 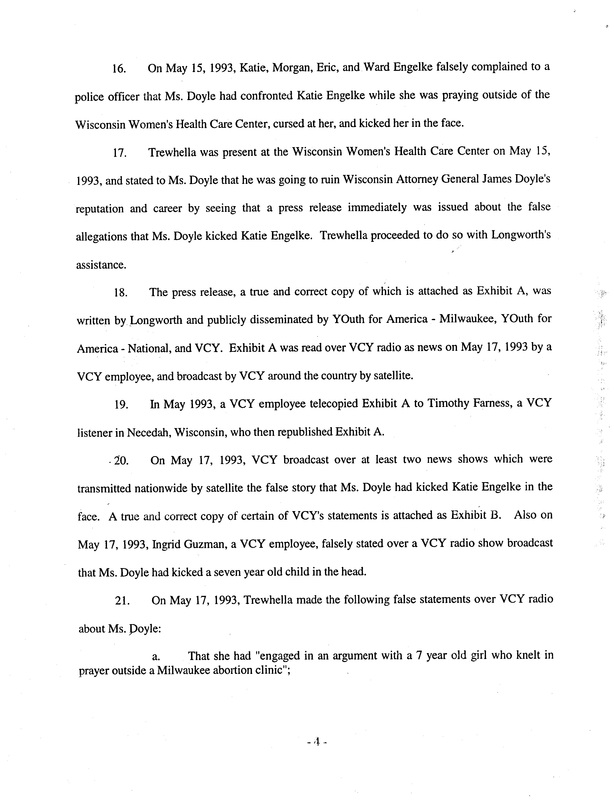 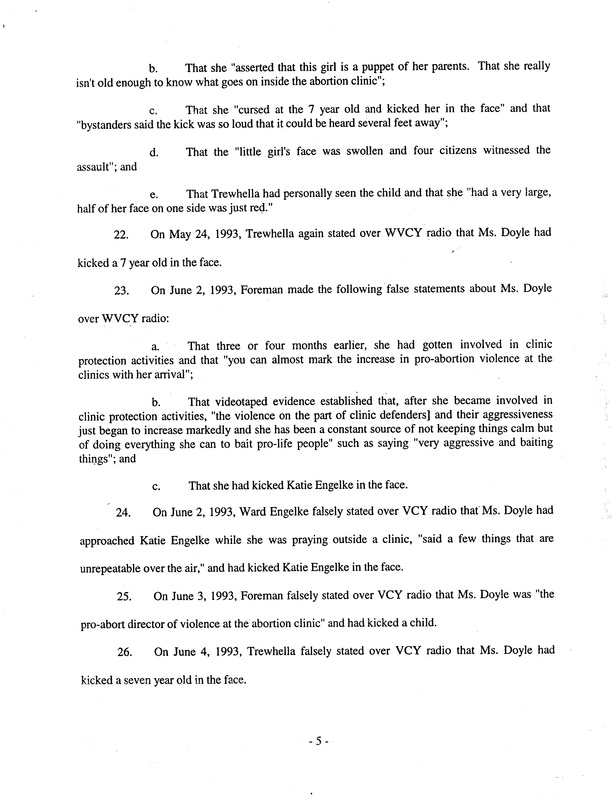 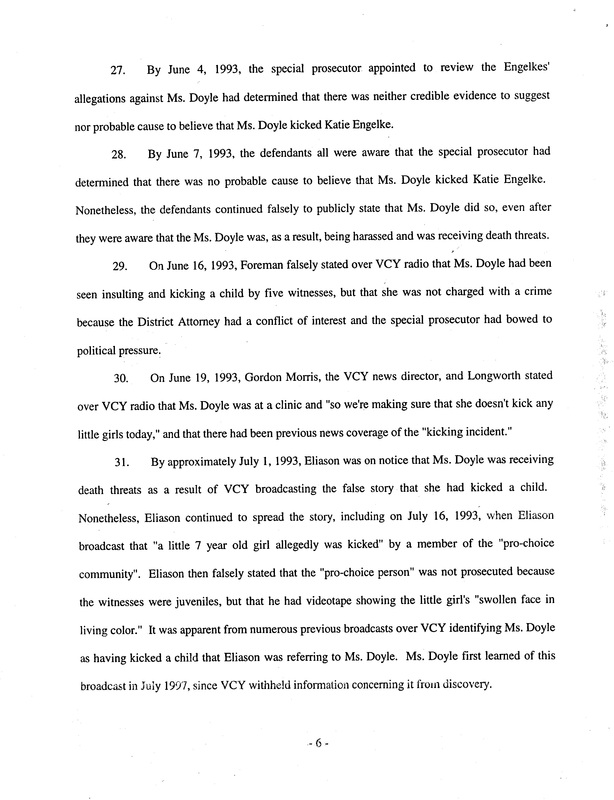 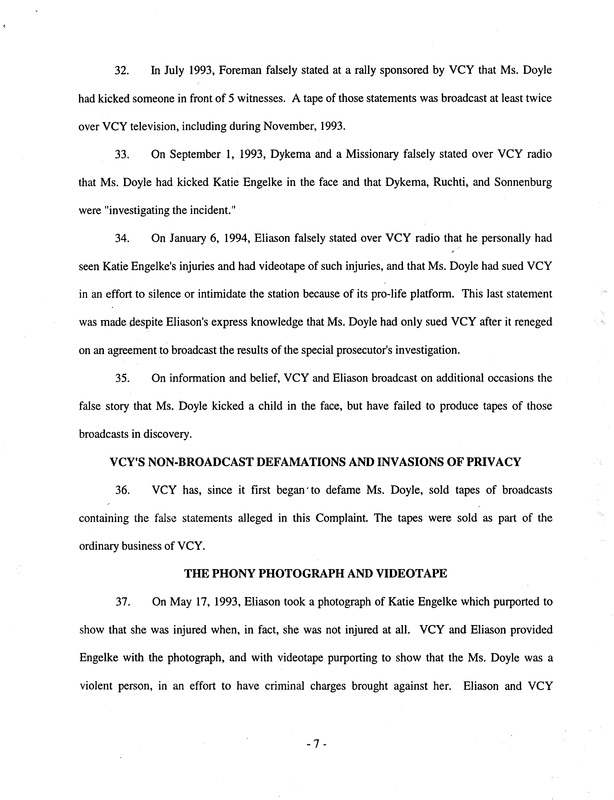 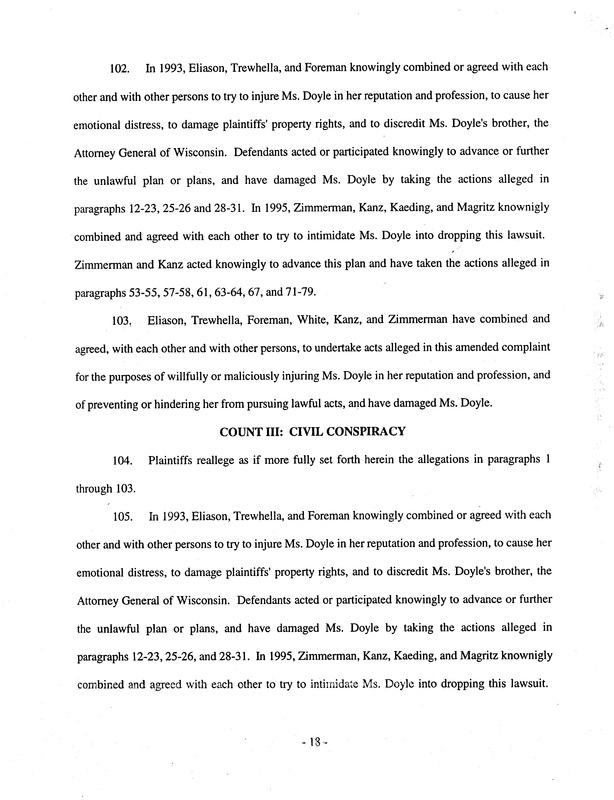 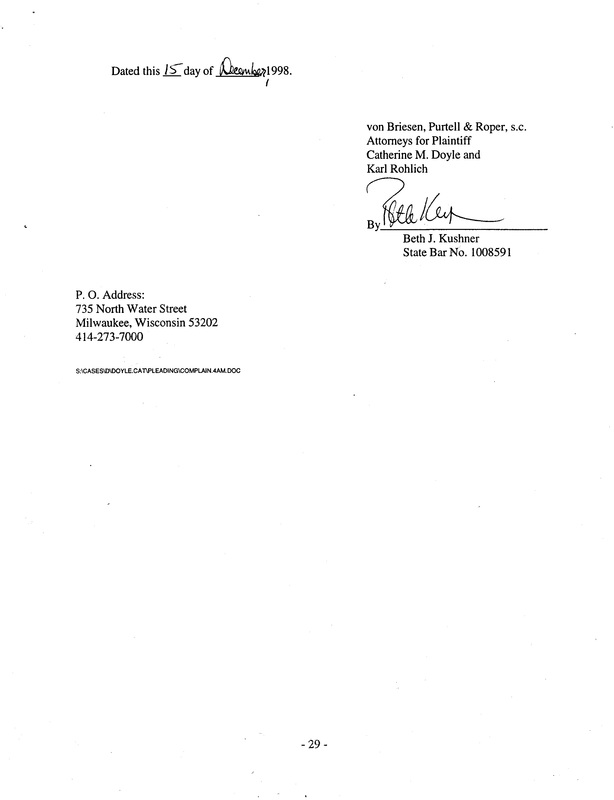 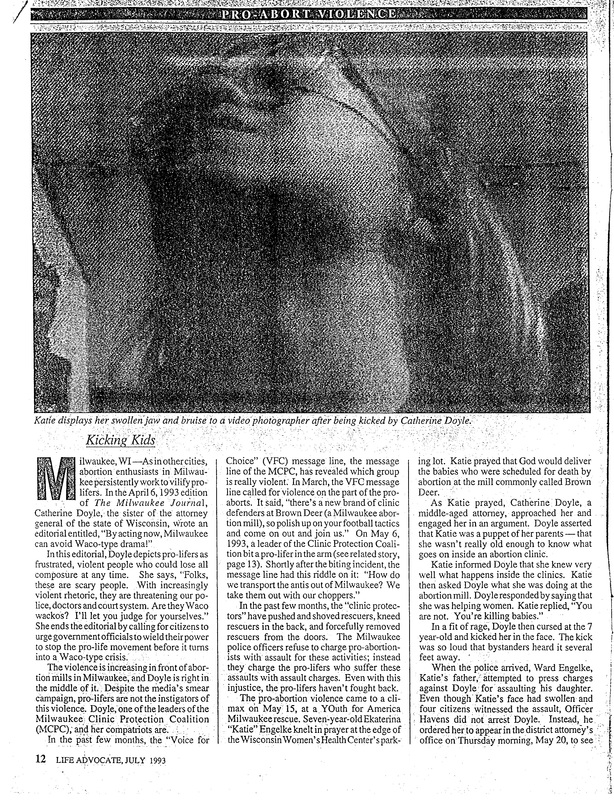 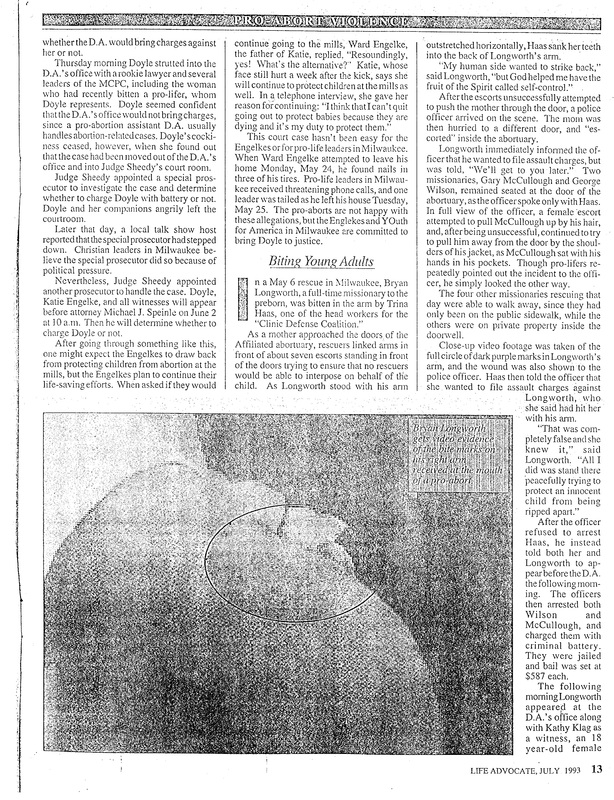 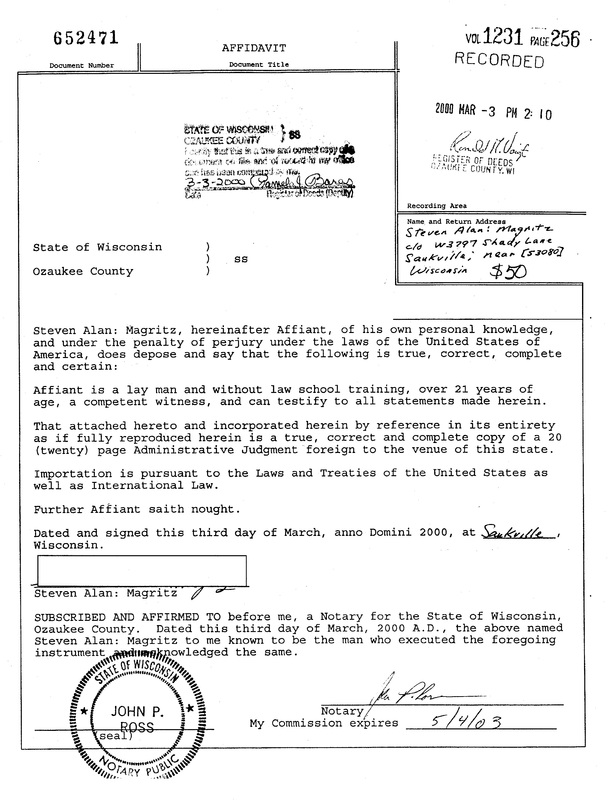 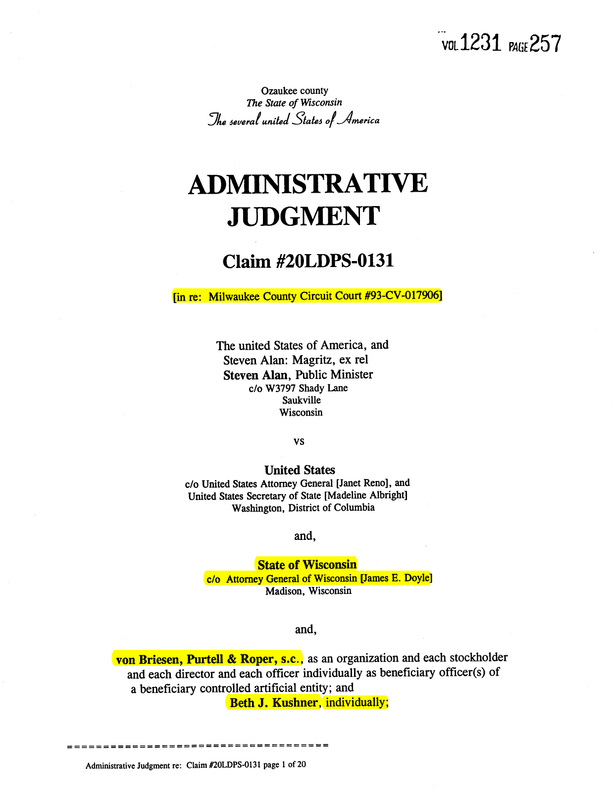 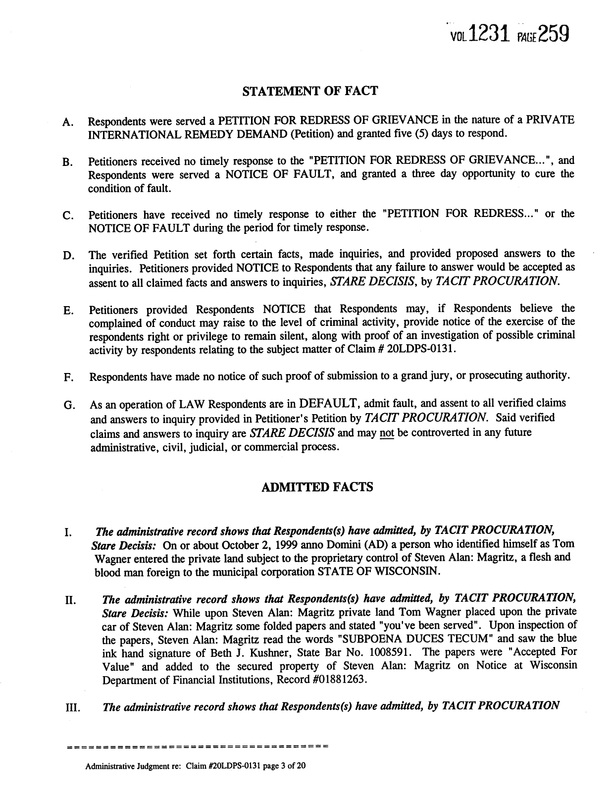 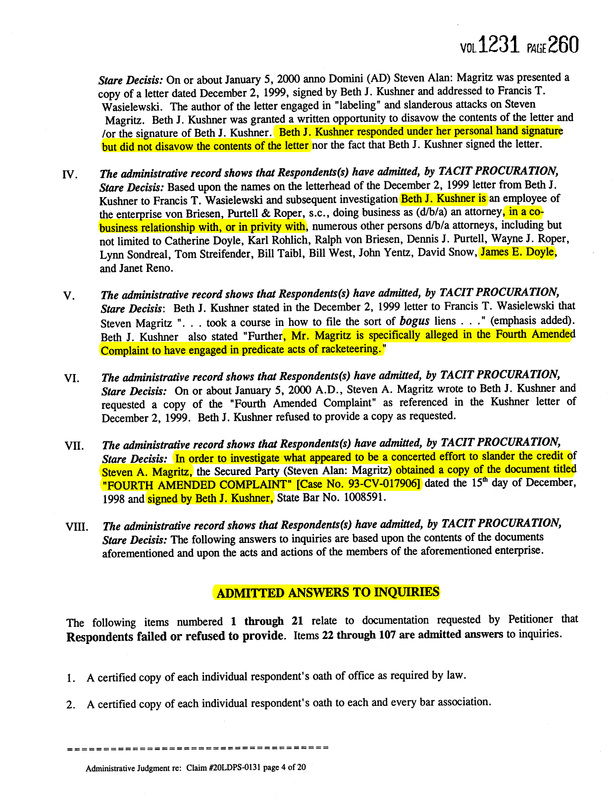 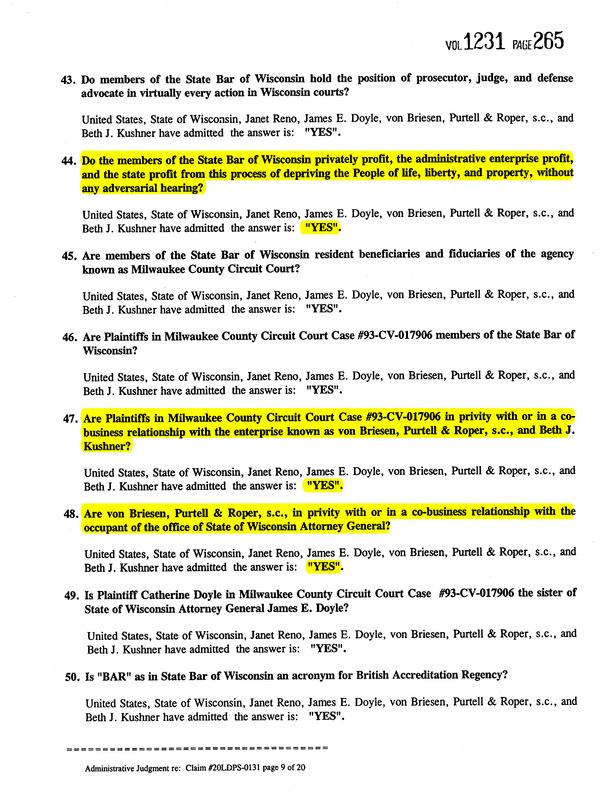 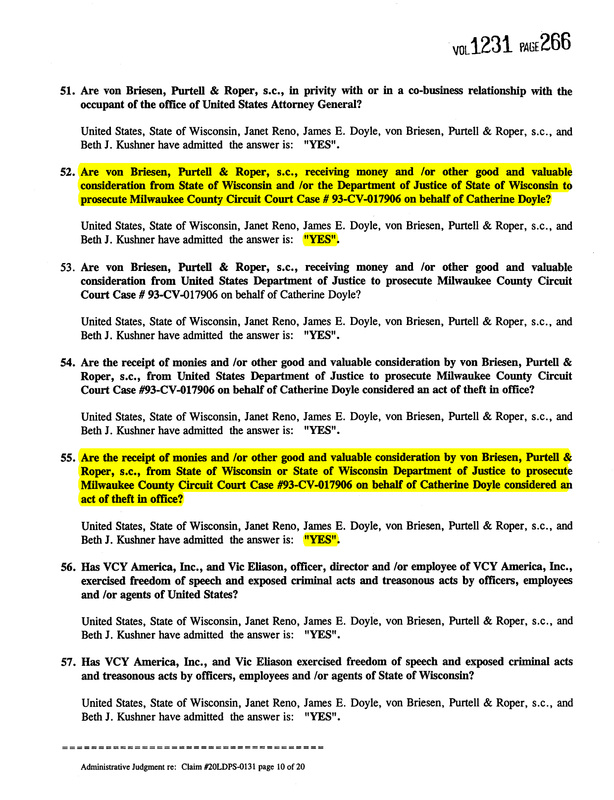 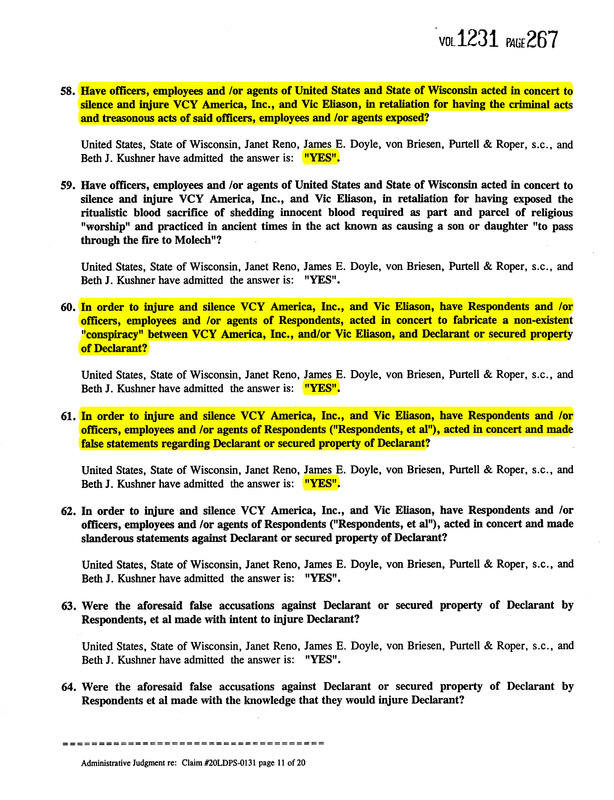 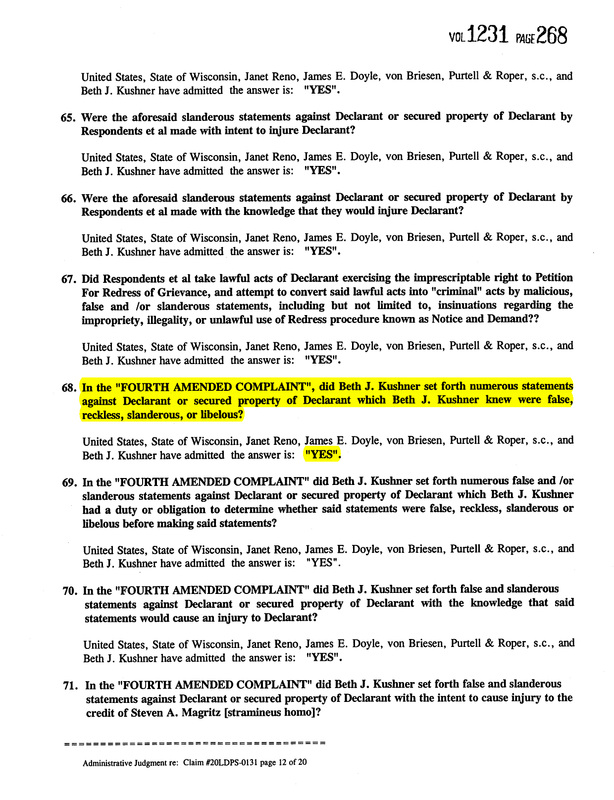 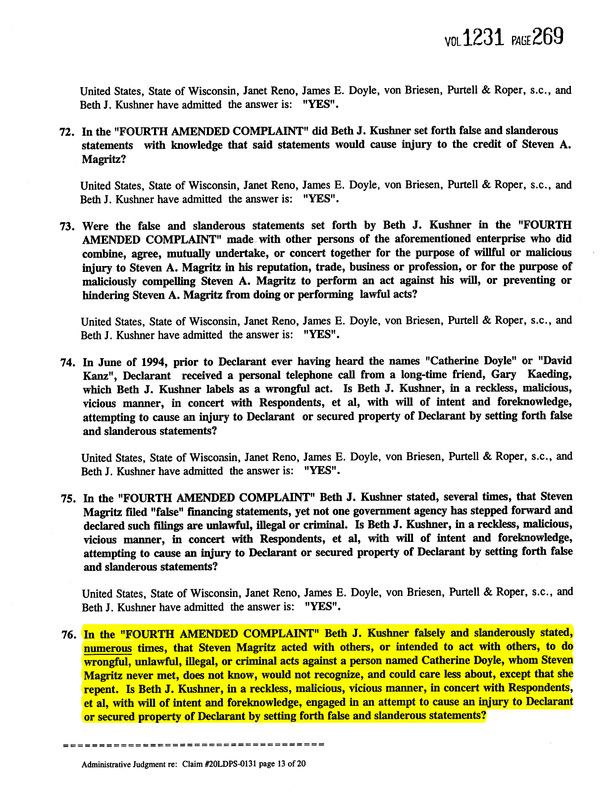 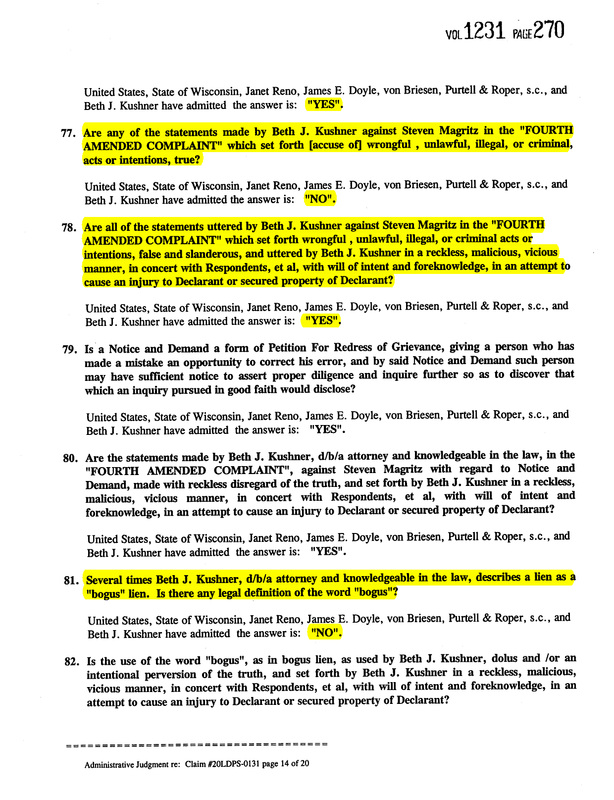 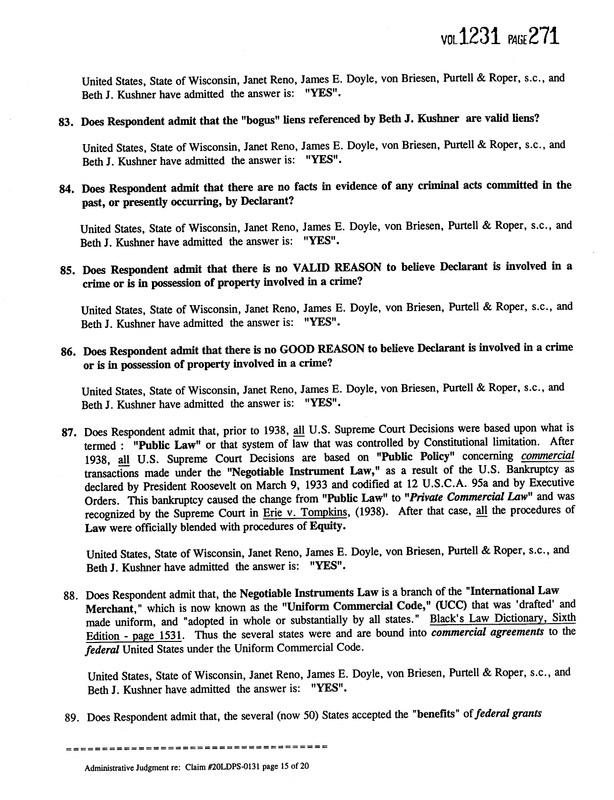 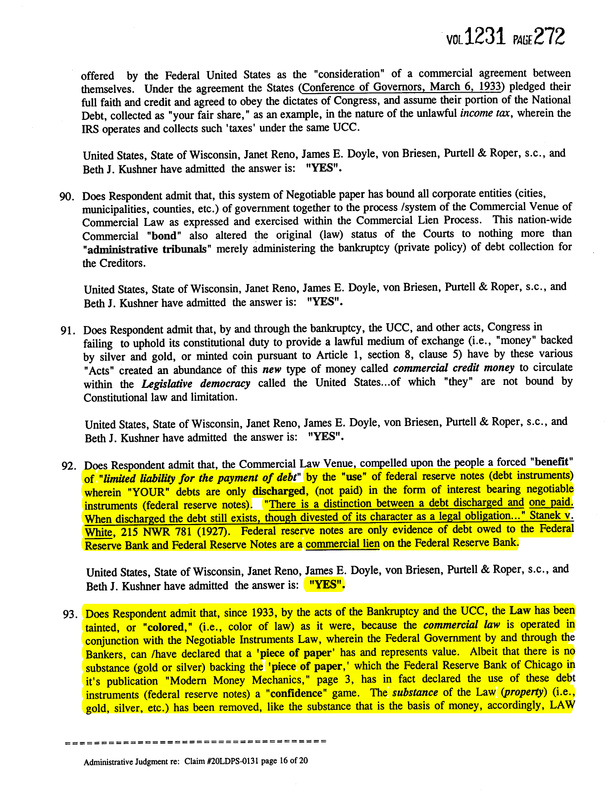 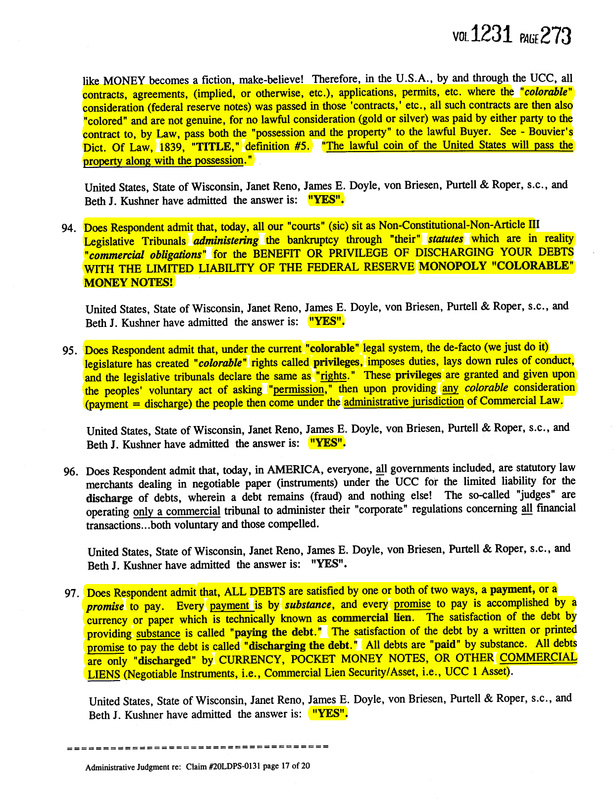 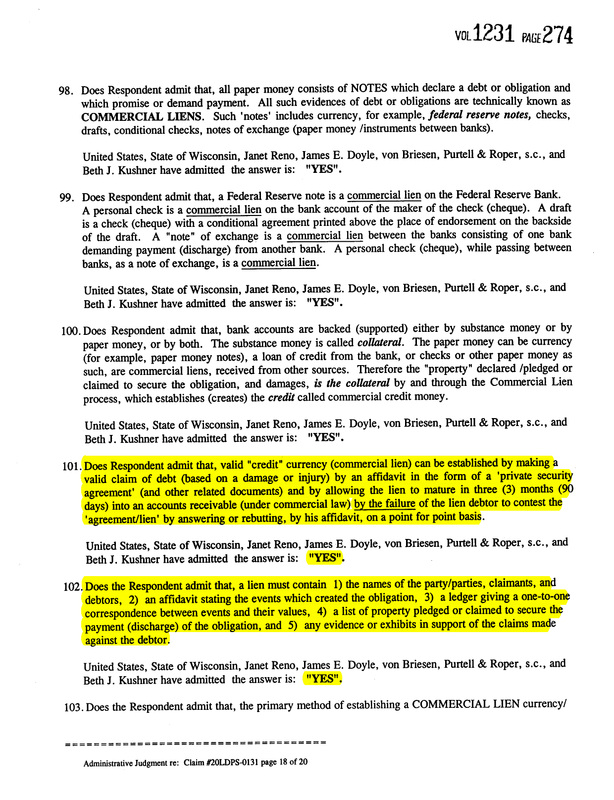 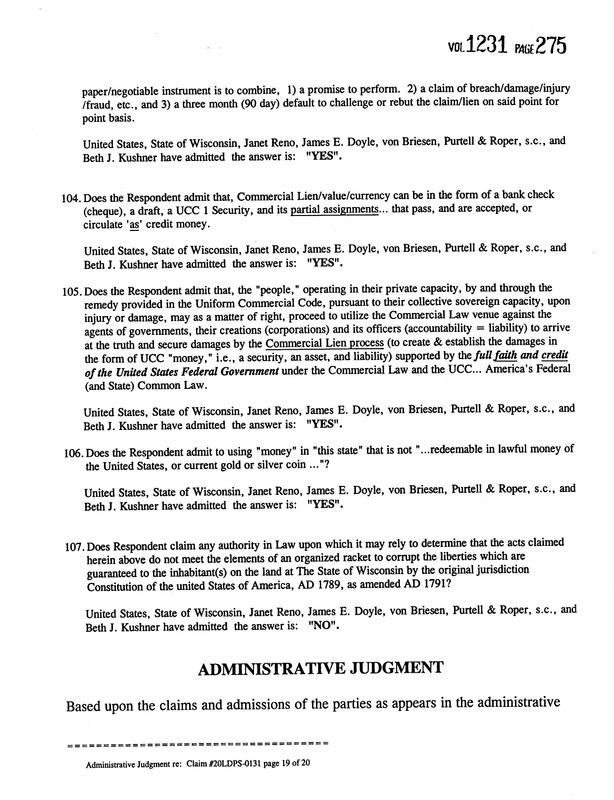 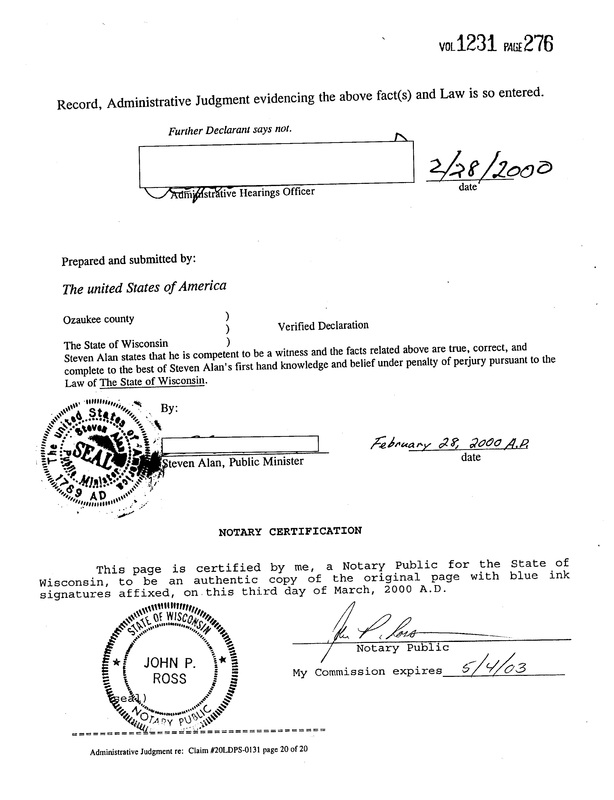 Go to the Prologue page for a timeline and summary description of what this website is about
Go to The Ozaukee MOB home page, www.OzaukeeMOB.org
Go to Public Officer Quislings and Traitors main page
Go to Lawless Sheriff Maurice A. "Maury" Straub page
Go to the "800 Lb Gorilla" Lawsuit for Breach of Fiduciary Duty main page
Did they die in vain?