Attorneys commit crimes that are covered up other attorneys,
judges, and other corrupt public officers

Public Officers that do not act with the highest fidelity to the Constitutions they are required to support exhibit contempt and disrespect for the high calling of public office.
Did they die in vain?

When judges and prosecutors, to whom the people naively look for "justice", DEFY the very Constitutions they are required to support, they are without excuse.  They can't say, "the devil made me do it", because they themselves are the very embodiment of evil.  Yes, evil is alive and well, and running rampant right now.  And anyone who has had any dealings with the "Just-us" system, the "Good Old Boys" attorneys' guild, knows that is true.  Just ask Gerry Spence, arguably the best lawyer in the history of America:

You just saw and heard Gerry Spence say that over a period of 60 years he has "never been in a single case, ... that the government hasn’t violated the law or misused its power.  Never one case.  Not one.”
Well then, why should the Magritz case be the exception to the rule?  We win.  All the time.  Because we lie, cheat, and steal.  And misuse the police power (violent force) of the state.  And get away with it, because “we’re the government”.  And we’ve got the guns.
So, it’s perfectly fine for my buddy Dennis Kenealy, a fellow government attorney, to steal the Steve Magritz Answer to Dennis’ phony “foreclosure” against the Magritz property in order to get a phony "Default" judgment.  After all, if he hadn’t stolen the Answer from the office files of the Clerk of Court, the phony “foreclosure” would have had to have been set for trial.  We couldn't allow that:
My good Buddy Dennis would have lost his ass and would have looked like an idiot.  And people would have re-learned that non-taxable, Private Property exists.  That would hurt our salaries and our privileged status as "Rulers" over the little people.  We will do anything, repeat, anything, to make sure “We the government” win.  What did Gerry Spence say?  We violate the law and misuse our power.  ALL THE TIME.  EVERY TIME.  Suck it up, slaves.  "WE are the RULERS."

What Gerol knows or should know, being an attorney highly trained in the law:

The extent to which Adam Y. Gerol went to cover-up crimes and commit new crimes

On July 13, 2011, for the "umpteenth time" the crimes of Shyster Kenealy were reported to DA Gerol and the Lawless Sheriff, "Mad Maury".  The chronology of the reporting is set forth on the Sandy Williams page.

Gerol failed to respond to the July 13, 2011, which was not unexpected since he and his former "boss", dishonest DA Sandy A. Williams had refused to respond to both Magritz and Investigative Reporter Gene Forte numerous times over the years. Magritz then filed his Verified Motion For A Determination of Probable Cause.  On about August 20th the notary public handed Magritz a response from DA Gerol which concluded:  "For all these reasons I am not taking any action with regard to this filing."
Nowhere in Gerol's excuses did Gerol deny that Kenealy had committed crimes.  Nowhere did Gerol state that Kenealy had NOT committed crimes.  Just a lot of dishonest attorney "Meadow Muffins" and "Road Apples".  However two of Gerol's paragraphs are worth reciting in their entirety to expose Gerol's duplicity.
Gerol wrote:
"First, the general time limit for prosecutions is contained in Wis. Stat. sec. 939.74.  This provides that prosecution for a felony must be commenced within six years after the commission of the act.  There are some exceptions to the general rule, however none of those would apply to the allegations made in this complaint.  Accordingly, as Mr. Magritz recites violations which he contends occurred in 2001, the statute of limitations for prosecuting any of these acts, even if true, would have ended in 2007 — more than four years ago.  As such, all of these claims are barred by the statute of limitations."
Commentary:  Magritz dealt with this in his reply to Gerol set forth below.
Gerol also wrote:
"Third, to the extent that this document is in the nature of a police report some additional observations must be made.  While this document carries a notary seal, the jurat is carefully crafted in such a way that the notary is not averring that the document was made under oath.  Rather the attestation simply states that Mr. Magritz "affix[ed] his signature to this Report."  This is noteworthy. When a person makes a statement under oath, or in person to a law enforcement official in their official capacity, the possibility for criminal prosecution for making a false statement enhances the weight of what that person reports.  Here, it appears as though the statement is actually crafted in such a way as to provide plausible denial if ultimately scrutinized."

Commentary:  Accusatory evil Adam.  The wording of Magritz' actual oath appeared in the first paragraph, so there was no reason to use the nebulous, undefined word "oath" in the jurat.  But state's attorneys usually get away with the deception.  A subsequent criminal report by Magritz was made under penalty of perjury, something you will never see in anything prepared by the DA's office.  Never.  Corrupt attorney Adam Y. Gerol's above duplicitous statements will be exposed below along with his evil intent.
____________________ 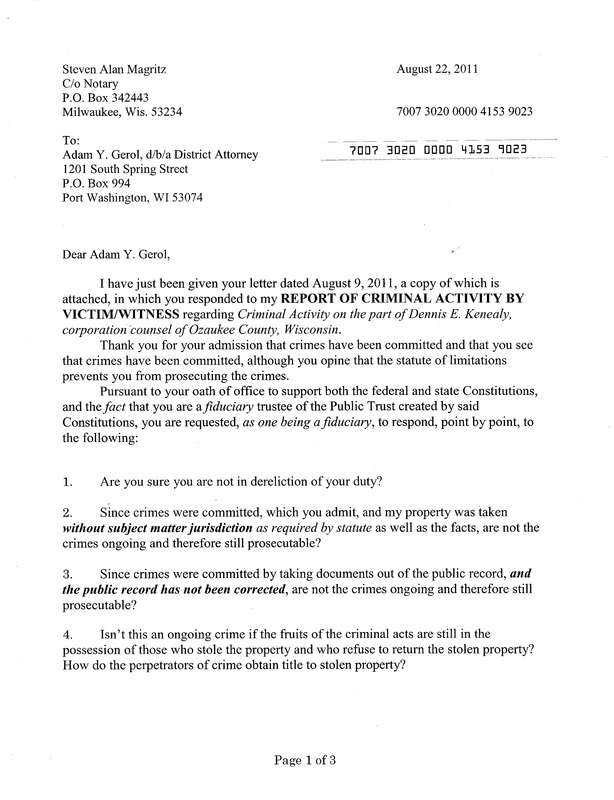 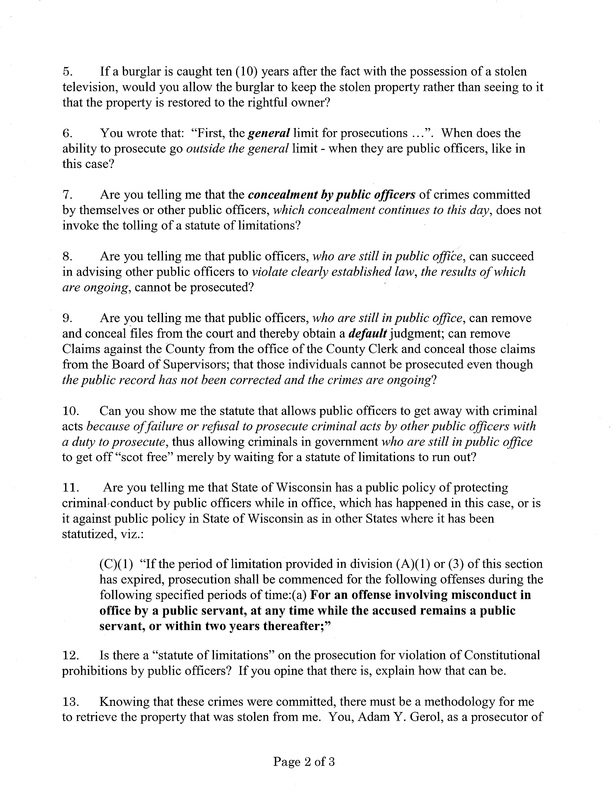 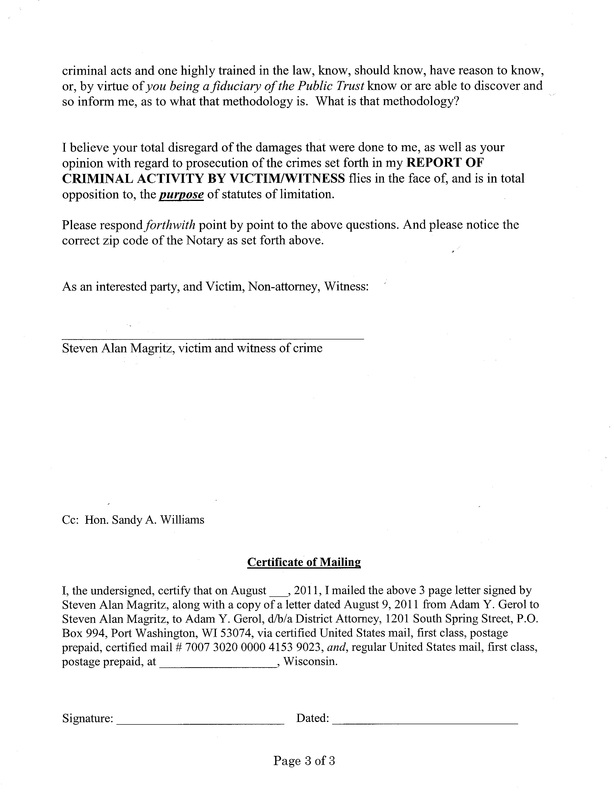 Did Dishonest District Attorney Adam Y. Gerol respond to the Magritz letter above?  No.  Just more obfuscation and "Meadow Muffins", with a side order of "Road Apples".
And of course, Gerol AGAIN refused to state that Kenealy had not committed crimes.

One has to have a strong stomach to read and appreciate how barnyard excrement, word twisting, outright lying, and despicable dishonesty, is the stock in trade of many attorneys, such as Adam Y. Gerol.  Of the many broadcasts by Investigative Reporter Gene Forte exposing dishonesty and corruption of attorneys across the country, the April 20, 2003 broadcast on the "Summaries" page is "must listening".
Gerol's "response" dated August 30, 2011:
I will not respond to your claims (sic) point by point but will expand on what you appear to be asking about the Statute of Limitations. ... You appear to be asking about the possibility of a "Discovery Rule" in this case. [This is followed by THREE PAGES of off-point barnyard excrement.]

Commentary:  Got your barf bags strapped on?  "Appear" to be asking?  Gerol is not an imbecile, a moron, or an idiot.  He just acts like one in order to evade responding to Magritz.  Evil, evil, evil.  Typical corrupt attorney.  By not addressing the questions, what this dishonest DA is saying is this:  We attorneys will protect ALL CRIMINAL ACTS OF FELLOW ATTORNEYS until the statute of limitations runs out on their crimes, and you can't do a damn thing about it.
We DA's in Wisconsin are MORE CORRUPT than in any other state in the Union, where the statute of limitations doesn't START until the public officer is OUT OF OFFICE.  Well, this commentator doesn't believe you can't prosecute the Accused attorney Dennis E. Kenealy.  But it is believable that YOU are more CORRUPT, Evil Adam Y. Gerol.  "Esquire".  For example, the statute in a sister state reads as follows:

If the period of limitation provided in division (A)(1) or (3) of this section has expired, prosecution shall be commenced for the following offenses during the following specified periods of time:
(a) For an offense involving misconduct in office by a public servant, at any time while the accused remains a public servant, or within two years thereafter. 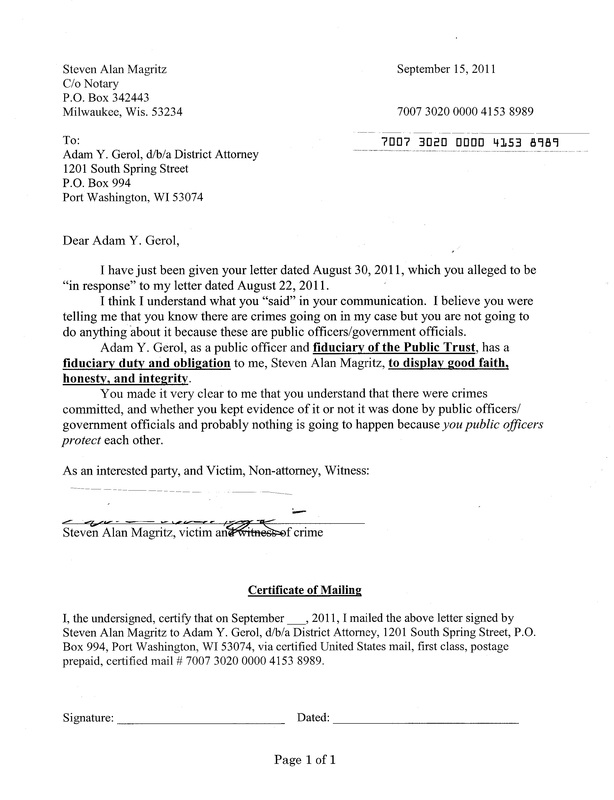 Gerol and Kenealy conspire to permanently put Magritz away to shut him up.  Two "Career Criminals", two "Professional Liars", two corrupt attorneys, use the "legal system" to conspire against one Midwest farm boy.  Two against one.  Fair enough odds.
On December 1, 2011, Shyster Kenealy and DA Adam Y. Gerol did a "tag-team" on Magritz to shut Magritz up.  Corporation Counsel, Shyster Dennis E. Kenealy, as "complaining party" for Ozaukee County, and his dishonest assistant Rhonda K. Gorden, acting as the attorney for Ozaukee County, filed "civil" injunction complaints against both Magritz and the attesting Notary Public for Magritz.  This is called "abuse of legal process".
Then Gerol went to corrupt "judge" Sandy A. Williams and got Williams to sign an arrest warrant for "MAGRITZ".  Submit or die, Magritz.  "WE" are the gods around here, and we're going to sic "Mad Maury" on you.

Hey, Evil Adam,  -  Here are some new words to add to your limited vocabulary:  good faith, honesty, integrity.  You will find them in the first half of the dictionary under g, h, and i, respectively.  By the way, those attributes are REQUIRED OF YOU as a Public Officer, so it might be a good idea for you to develop them before the people learn how to enforce the 14th Amendment and run you out of office covered with tar and feathers.

Evil Adam Gerol, as his part of the conspiracy with Shyster Dennis E. Kenealy, tried to shut Magritz up by putting him in prison based upon the false charges, scandalous accusations, and malicious prosecution shown below. 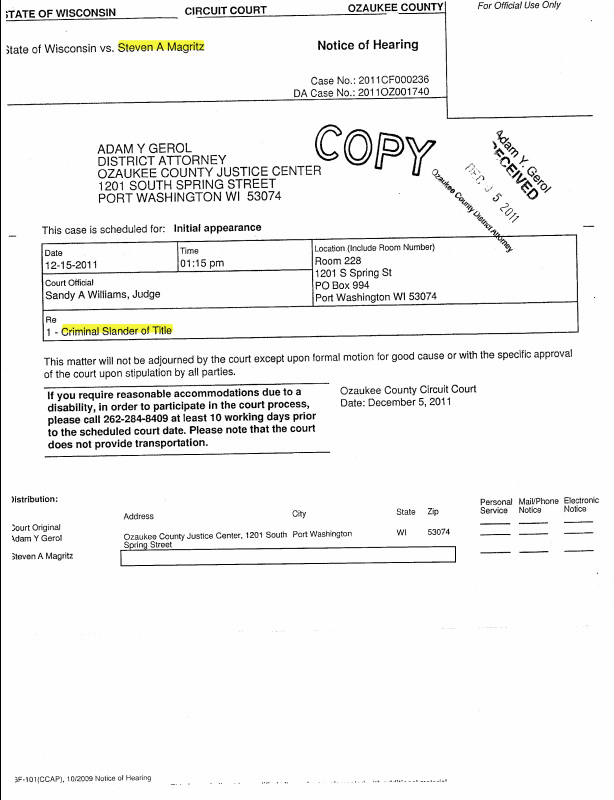 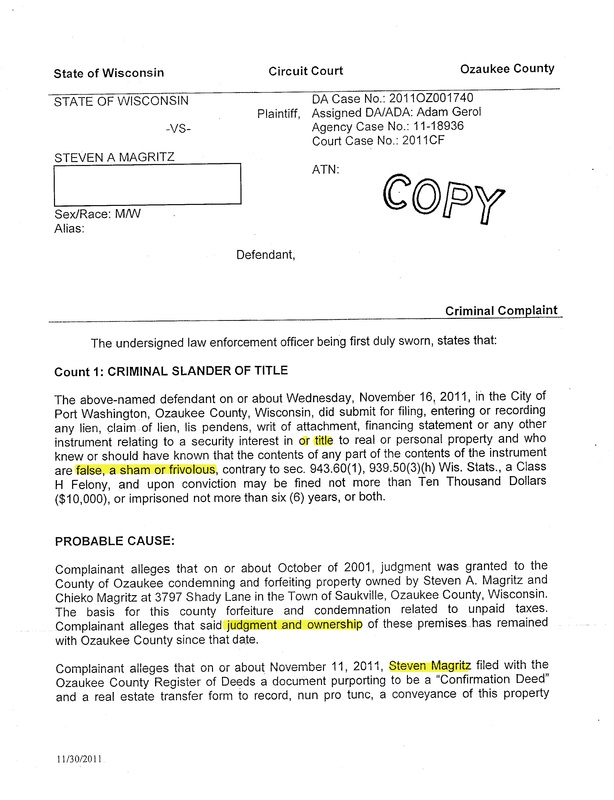 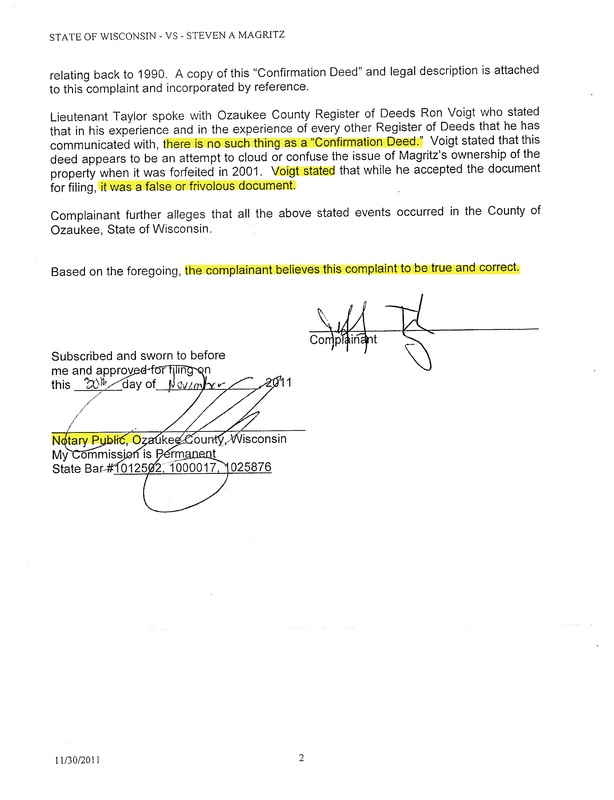 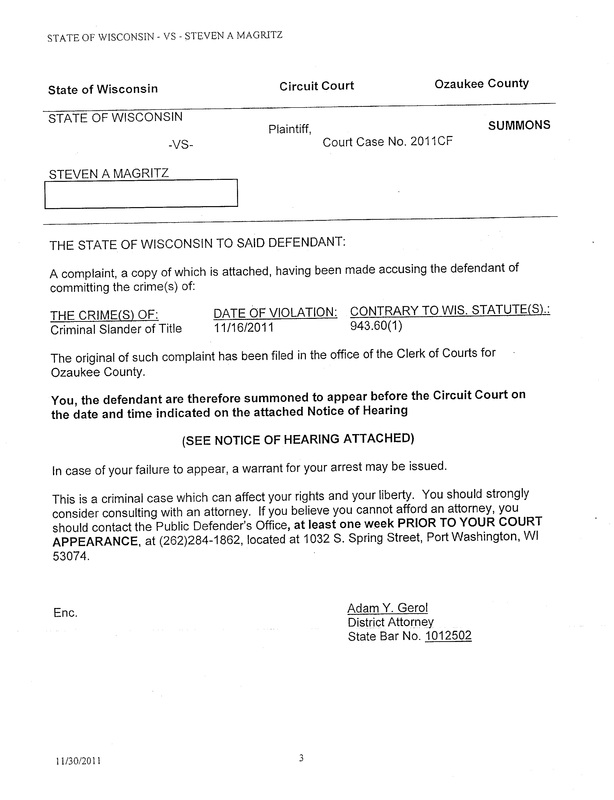 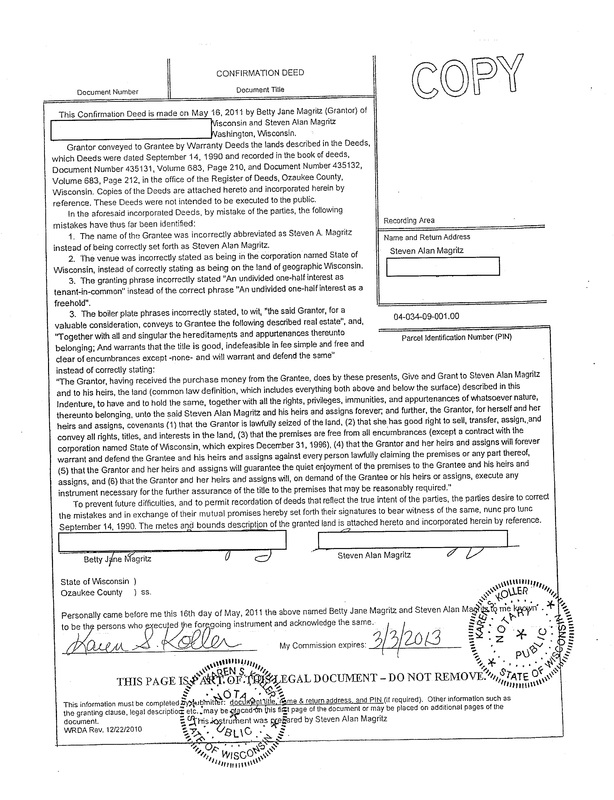 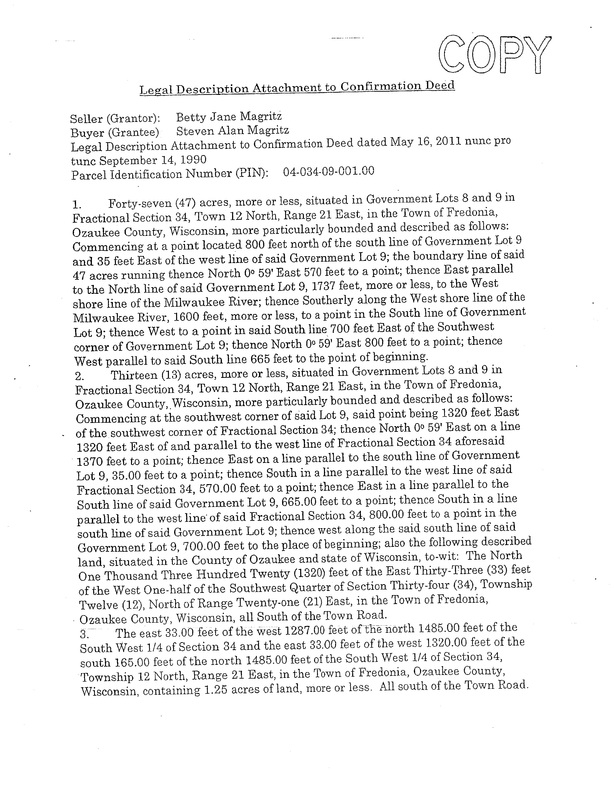 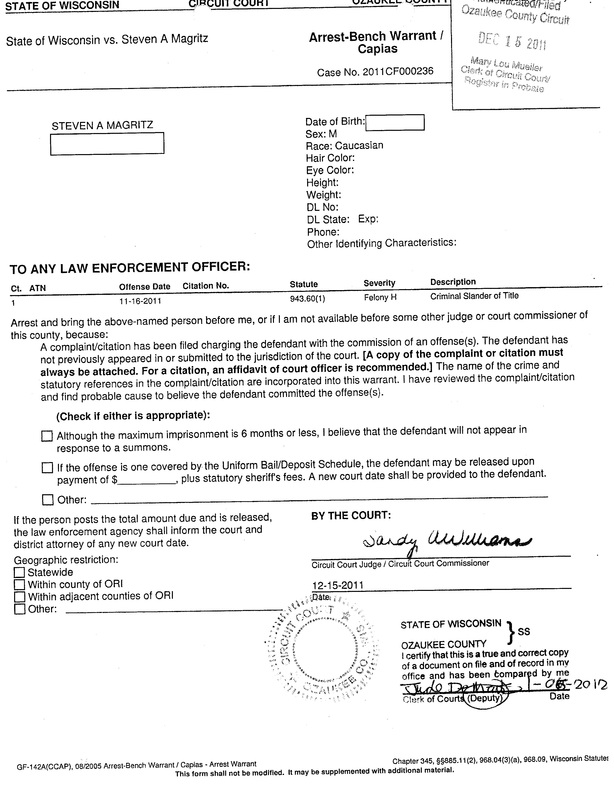 The Signature of the Notary witnessing the signature of Taylor, 3rd page of "Complaint"

First, Notice that the purported Summons is NOT SIGNED.  It merely has the typed name:  Adam Y. Gerol.

Third, notice the three Bar Association numbers below the "My Commission is Permanent", indicating an attorney.  The first bar number is assigned to Gerol, the second to Jeffrey A. Sisley, and the third to Patti L. Wabitsch.  They didn't all three notarize that phony "Criminal Complaint".  Is this more obfuscation and "plausible deniability" Gerol?  But the buck stops with you, Gerol, even though apparently no one in your office wants the blame for filing such a blatantly phony "Criminal Complaint" trying to put an innocent man in prison.

Gerol's signature on a letter to Sandy A. Williams obtained from the clerk of court.
This is not the same as the illegible scribbling on the "Criminal Complaint". 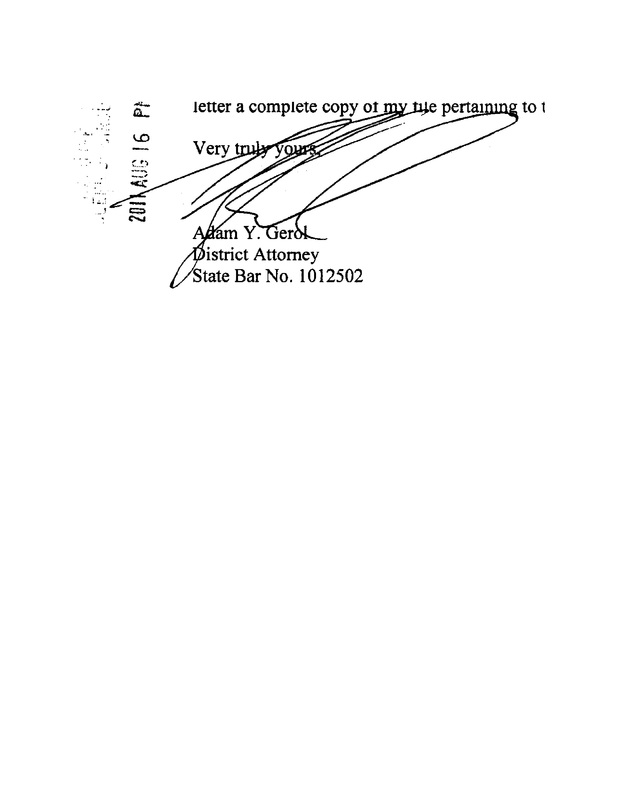 Yeah, yeah, yeah, Gerol.  I know.
But why don't you grow some cojones so you can do the dirty deed yourself.
You are a disgrace even to the "hue"-man beings (color of mankind).
Gad.  Is there anything beneath you, and those of your ilk?
Have you stopped raping babies, Adam Y. Gerol?