Those who cover-up crimes are more dishonest, corrupt, crooked, culpable, immoral, reprobate, decadent, degenerate, worthy of punishment, etc., than the original crime-committing attorney.
Did they die in vain?

Let's Make This Easy for You, Mr. Wirth.
Considering what you said in the interview broadcast May 25, 2003:

It is perfectly fine and dandy for the Corporation Counsel of our Corporation named Ozaukee County, attorney Dennis E. Kenealy, to steal the Answer of opposing party Steve Magritz from the office files of the Clerk of Court in order to get a "Default" Judgment against  Magritz.  That way we get the Magritz property for free.  Free, Free, Free.  We don't have to pay Magritz for it.  We just sic our Revenue Agent "Maury Straub" out to the Magritz property with a 24 man SWAT Team, threaten to kill Magritz, and throw him in our "bed and breakfast" joint, a/k/a "jail".  No sweat.  No problem.  "We" run this county, so shut up or we'll destroy you, too.

Gustav W. Wirth, Jr. was the Chief Kahuna, Chairman of the Board of Supervisors when Kenealy committed his crimes. Wirth aggressively concealed Kenealy's crimes.  That is called being an Accessory After the Fact.
Gustav W. Wirth, Jr. trampled on the First Amendment guarantee of Freedom of Speech and Freedom of the Press by threatening Investigative Reporter Gene Forte in order to shut Forte up.
Gustav W. Wirth, Jr. threatened Investigative Reporter Gene Forte, radio host from Los Angeles radio station KRLA, with using Wirth's contacts within the Federal Communications Commission (FCC) to shut down the radio station.  That is called intimidation and extortion.
Gustav W. Wirth, Jr., the CEO (Chief Executive Officer, Chairman of the Board, Chief Kahuna) of the public corporation named Ozaukee County, and the Chairman of the Board of Supervisors who concealed the stealing of the Magritz property, went that "extra mile" to breach his Fiduciary Duty to the federal and state Constitutions and to the people, who are the beneficiaries of the Public Trusts created by the Constitutions. 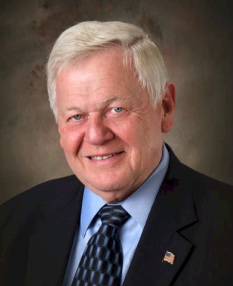 Gus Wirth, Feeding at the Public Trough for Personal Gain, Money and Lust for Power and Control

Wirth was born with a silver spoon in his mouth, and parlayed that silver spoon into a pot of gold through government contracts for goods and services. After all, that's what government is for, isn't it?  Using government to obtain personal wealth and power by using one's political contacts, cronies, or buddies?  That is the modus operandi of The Ozaukee County MOB member named Gustav W. Wirth, Jr.

Wirth used his political connections to obtain extremely lucrative telephone and radio communications contracts with city and county governments. Check out his Bio on the official Ozaukee County website.  Wirth brazenly flaunts the numerous businesses he owns, operates, is Registered Agent for, is Chairman of, is President or Secretary of, financially benefits from, and was previously associated with.

Nowhere is there even the slightest hint that Wirth has any desire, or intention, to obey the Constitutions that he is sworn to support.  NOWHERE.

Nowhere is there even the slightest hint that Wirth has any desire, or any intention, to protect the individual unalienable rights to Life, Liberty, and Property of the people, which is the SOLE LAWFUL PURPOSE OF GOVERNMENT.  NOWHERE.

After obtaining wealth, some quislings like Wirth are driven by the lust for political power and control over others.  To paraphrase Augustine, "The desire to rule over one's equals is an intolerable lust of the soul."

BUT PUBLIC OFFICERS ARE FIDUCIARIES OF THE PUBLIC TRUSTS CREATED BY THE CONSTITUTIONS.  Public Officers owe the highest fidelity to the Constitutions which they are required to support.  AT ALL TIMES they are required to display honesty, integrity, and good faith to the people, who are the beneficiaries of the Public Trusts.  AT ALL TIMES they are required to protect the Life, Liberty, and Private Property of the people.  The one and only purpose of the fiduciaries, or trustees, of the Public Trusts is to protect the individual unalienable rights of the people. Period.  End of story.  To do otherwise, or to use a public office for personal benefit, is dishonest, and is a BREACH OF FIDUCIARY DUTY.

Breach of the Public Trust, breach of a fiduciary duty, betrayal of a trust imposed or entrusted, betraying our Republic for 30 pieces of silver, trampling on unalienable rights one has a duty to defend, is as disgusting, is as reprehensible, is as despicable, - as baby raping.  One cannot go any lower.

But Wirth took it one step further.  Wirth not only trampled on the First Amendment guarantee of Freedom of Speech and Freedom of the Press, Wirth crossed the line by aggressively concealing the crimes associated with the stealing of the Magritz property.  Wirth threatened to use his contacts within the federal government, specifically the FCC, to revoke the radio station license of KRLA, the second largest radio station in Los Angeles, in order to silence reporter Gene Forte.  Gene Forte is/was a businessman, radio host, investigative reporter, and candidate for governor of California.  No slouch.
______________________________

Before listening to recordings of Wirth, consider what Forte said on May 18, 2003:

"What we see actually happening is a smut and smear campaign orchestrated by Mr. Dennis Kenealy, the County attorney, along with Mr. Gus Wirth and Jeffrey Schmidt, with the help of Mr. Bill Shanen IV at the Ozaukee Press to keep a lid on this from the public.  Because if the public did know that this man's property was being taken illegally like this, they would've gotten out the tar and feathers and they would've taken these public officials and put them out of town on a rail like they used to do in the good old days."

And consider that back in 2001 through January 2002 Magritz had obtained admissions or agreements from the respective parties of the following:

Now listen to Quisling Gustav W. Wirth, Jr. in his own words and from his own lips: