Attorneys commit crimes that are covered up other attorneys,
judges, and other public officers

"Crime" is here linked to Definitions 3 times.  Please, please, please - read the current definition of "crime".  It will knock your socks off, and you will begin to see why we are "swimming" in a septic tank.  No lie.  No exaggeration.  Pure idolatry.

When judges and prosecutors, to whom the people naively look for "justice", DEFY the very Constitutions they are required to support, they are without excuse.  They can't say, "the devil made me do it", because they themselves are the very embodiment of evil.  Yes, evil is alive and well, and running rampant right now.  And anyone who has had any dealings with the "Just-us" system, the "Good Old Boys" attorneys' guild, knows that is true.    Just ask Gerry Spence, arguably the best lawyer in the history of America:

When Public Officers breach their fiduciary duty, it is the responsibility of the people to hold the defiant Public Officers accountable:  “It is not the function of our Government to keep the citizen from falling into error; it is the function of the citizen to keep the Government from falling into error.”
Did they die in vain?

"Politics" boils down to the exercise of power.  Today's judges and prosecutors are the Public Officers most abusive of power.  One pundit said most of them are so crooked they won't have to be buried, they'll just screw themselves into the ground.

Click the pic below to go to their very own, personal page of malfeasance in public office and Breach of the Public Trust:

These would make really good "mug shots", wouldn't they? 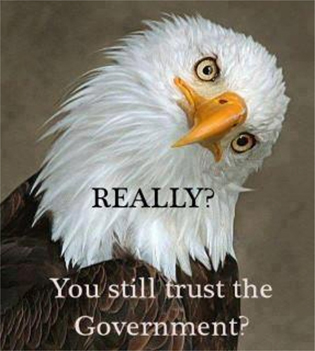 Do you trust the government when the TRUSTEES are violent, tyrannical, lawless oppressors and deny the right of the people to own private property?
Go to the Prologue page for a timeline and summary description of what this website is about